Heroin is a highly addictive and rapidly acting opiate and is produced from morphine, which is the main component in opium.   Opium is a naturally occurring substance that is found in the seedpod of certain varieties of Asian opium poppy plants.   The appearance of heroin varies according to the type and purity levels.   Most heroin is usually brown or blackish in color, known as black tar heroin, while high purity heroin usually has a white, or grayish color.   Variations in color represent the presence of impurities with the whiter the heroin the higher the purity levels.
Heroin can be either snorted, sniffed, or smoked, but the most popular way of using heroin is through injection.   Injecting heroin offers the quickest and most potent high and is described as a euphoric surge that sweeps all over your whole body.   However, injecting heroin comes with a higher risk of passing dangerous blood born diseases like HIV/AIDS and Hepatitis C.   Injecting heroin can also damage the veins, can cause serious infections in the body like kidney and heart infections and can result in fatal overdose.

History of Heroin Use 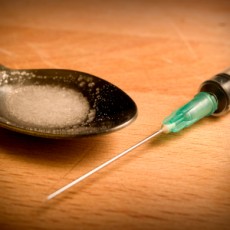 The use of opium based drugs has a long and painful history throughout the world.   It is thought that Arab traders introduced opium to China around the 7th and 8th century where it was used as a medicine until the 1700s.   In Victorian times, opium was taken by all classes of citizens in the form of pills or dissolved in alcohol.   It wasn’t until 1874 that the drug heroin was created as we know it today.   Oddly enough, heroin was first introduced in 1874 as a non-addictive substitute for morphine addiction.   However, as the drug quickly took hold of the American population many realized that heroin was even more addictive and dangerous than morphine, and more destructive.   Heroin was made illegal in 1924 by the Heroin Act, but by then it was too late.

Heroin is often considered one of the most dangerous and addictive substances man has ever created.   Because heroin is derived from synthetic morphine, it comes with a high risk of addiction and dependency.   Because a tolerance to heroin can quickly develop with regular use, the individuals physiological and psychological responses to the drug naturally decreases.   This can lead to physical dependence, where the body has adapted to the presence of heroin in the system and needs the drug to function normally.   Heroin addiction often leads to powerful heroin withdrawal symptoms, also known as dope sickness.   Dope sickness can be a major obstacle for someone trying to quit heroin, and many users often keep using the drug just to avoid these horrible side effects altogether.