Side Effects of Heroin Use

Heroin is an extremely addictive narcotic derived from the seed pod of certain varieties of Asian Poppy Plants.   Heroin has a variety of nicknames including Smack, Dope, Brown Sugar, Mud, Big H, Diesel, and Black Tar.   Heroin can be administered by injecting, snorting, sniffing or smoking the drug, but injection is the most popular and offers the most potent high.   Heroin has considerable side effects including heart and vein infections, lowered heart rate, damage to vital organs, as well as a higher risk of blood born illnesses such as HIV/AIDS and Hepatitis, through the sharing of infected needles.   However, one of the most common and debilitating side effects of heroin use is long term addiction and dependence.

One reason why heroin addiction is so destructive is because of the way heroin interacts with the brain.   After using heroin for an extended period of time the brain will adapt to the influx of heroin in the body and begin to lose it’s capacity to manage normal body functions.   Long term heroin use also effects the way the brain manages pain and will eventually begin to depend on the heroin to produce endorphins, which are the body’s natural pain killers.   Without the body producing any endorphins on it’s own, the user will experience extreme pain and sickness, also known as heroin withdrawal. 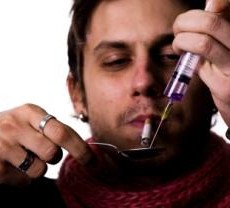 Heroin withdrawal is a devastating side effect of heroin dependency and addiction.   After the body becomes so used to the incursion of heroin in the body, it will no longer be able to function normally without the drug.   This leads to painful withdrawal symptoms which can make addicts feel like their in a living nightmare.   Heroin withdrawal symptoms include nausea, vomiting, prolonged craving for heroin, diarrhea, excessive yawning, depression, bone and muscle pain, cold flashes, cold sweats, insomnia, high blood pressure, anxiety, heart attack, stroke, to name a few.   Heroin withdrawal symptoms can even be so severe that users will continue to use the drug, even if they sincerely want to quit, just to avoid these horrible symptoms altogether.

Ways to Fight a Heroin Addiction

There are a number of effective treatment options available for a heroin addiction and withdrawal symptoms.   There are numerous rehab clinics and outpatient heroin treatment centers that specialize in treating heroin addictions.   Here you will get the undivided attention and support you need to quit using and to develop a plan to stay sober.   A major advantage of inpatient and outpatient treatment centers is that they can effectively treat your withdrawal symptoms.

One way they can do this is by using the drug Methadone.   Methadone is a powerful drug that is used for the treatment of heroin withdrawal symptoms.   Methadone is a powerful synthetic opioid pain reliever and is very similar to morphine.   Doctors and clinics use methadone to treat severe pain associated with heroin withdrawal symptoms and is widely used in many drug addiction recovery programs.   The only problem with Methadone is that it is highly addictive, and users can begin to become dependent on Methadone, instead of heroin.   A new alternative to methadone, Suboxone, works in the same way but is far less addictive and has fewer side effects.   Suboxone can be used for the treatment of any opiate addiction including heroin, oxycontin, oxycodone, percocet, morphine, and vicodin.