Opiate Addiction on the Rise

Various national drug and health agencies that have studied opiate abuse and addiction over the last 10 years show that not only is opiate abuse on the rise, but is becoming a real epidemic in many areas of the country. Opiate addiction can come in many forms, from heroin to morphine addiction, to dependency on powerful prescription painkillers like Oxycontin, Oxycodone and Vicodin. Recent studies suggest that opiates are being widely abused all over the country, and are affecting a younger population with each passing year. What may start off as experimentation for many young individuals has led many into opiate dependency and a lifelong battle with opiate addiction.

With the popularity of opiates increasing to levels not seen since the mid seventies, many addiction experts across the United States are worried that this may only be beginning. Recent opiate addiction statistics support claims of increased drug abuse throughout the country. In 2007, nearly two and half million Americans had abused prescription painkillers like oxycontin and vicodin to get high. The year before, in 2006, a drug survey done by the National Institute of Drug Abuse showed that nearly half a million individuals have admitted to using heroin at least one time during that past year. A similar study done by the World Health Organization estimates that in the US alone, there are over 3 million people who are currently addicted to one form of opiate or another. 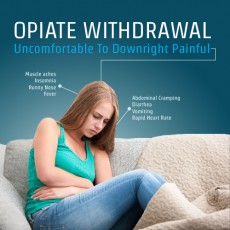 One of the major reasons for this wide-ranging opiate abuse is the widespread availability of powerful opiate based prescription drugs like oxycontin and vicodin. Because young people often view prescription pills to be less dangerous than other more well known illicit drugs like heroin and cocaine, they often feel that they are choosing a “safer” alternative. Also, because powerful prescription pain killers are often readily available in homes all across the country, it is very common for young adults to get access to these drugs through family members or friends. Oftentimes, these pills are taken along with other substances such as alcohol, cocaine or other prescription drugs, which has led to thousands of overdose deaths over the last 10 years.

Overall, nearly every study taken on opiate abuse over the last 10 years reports the same grizzly findings, that opiate abuse and addiction is a major threat to this country if we choose to accept it or not. Also, the same studies show that opiate abuse is affecting a younger generation than in years past and goes beyond all race, and socioeconomic backgrounds. In order to save the next generation from this powerful and destructive epidemic, we all need to do a better job of educating young people of the dangers and risks associated with opiate abuse.